I never go back on my word. Thats my ninja way!

After the 4th great shinobi war, everything has been quite peaceful. Naruto and Sasuke each settled down and started a family of their own. Naruto and Hinata got married, has a son name Boruto and a daughter Himawari. Sasuke married Sakura and had a daughter called Sarada. Really heartwarming when you see the characters you grew up with have kids ❤

The biggest difference I will point out though is that 13 episodes into Naruto and they were fighting for life and death with Zabuza in the hidden mist village. 13 episodes into Boruto and they were still trying to find a cat LMAO. It’s understandable due to the differences in each era. I mean you can’t make kids go fight a war in an era of peace can you lol. Regardless, the love for the series still remains as we see Boruto develops as a ninja.

Now its time for Boruto to shine! Boruto is in every way like his dad expect luckily he got Hinata’s brain and is actually quite smart. Nonetheless, he still gets into quite a lot of trouble lol. His relationship with Naruto isn’t that great either because ever since becoming the Hokage, he’s been extremely busy. 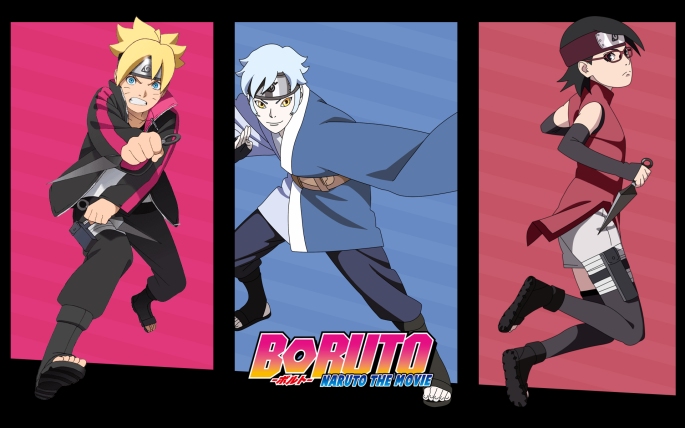 Due to fate, Boruto was placed into the same team as Sarada and Mitsuki. Mitsuki is well…..Orochimaru’s son……….gender neutrality is the only answer I’ve got for Orochimaru lol. These guys were placed into Team 7 identical to their parents. The legendary team 7 is led by Kohohamaru who is now all grown up and is the total package I must say.

Boruto has been showings signs of developing the Jougan visual powers. The only thing we’ve seen so far is that its ability to warp large Nue and detect abnormal energy. Mixed it with wind, lighting style and even the Rasengan, Boruto creates a variety of battle techniques that he utilizes on the battlefield to kick some ass! There is no doubt that Boruto is a GENIUS and only time will tell how strong he will become. And because of the lines on his face, he should be able to control the nine-tails chakra when the time comes.

Back to this episode, Mitsuki was last seen attacking a Chunin who was on watch. Mysterious leaving the village with only the message “Boruto, this is my will”. What’s that, you want to become like your dad Orochimaru who destroys the hidden leaf village is it? HELL NO MITSUKI. YOU GET YOUR ASS BACK HERE. In my opinion, Mitsuki is the strongest out of the trio at this point in time. He is able to utilise sage mode but has been reluctant to do so because he didn’t want to blow his cover.

We later then discover that Boruto and Sarada have snuck out of the hidden leaf to visit Orochimaru himself.  What did they find there? Just Orochimaru doing his shady work as usual LOL. They handed him Mitsuki’s pet snake and he was unable to extract anything from it. OROCHIMARU YOU USELESS PIECE OF SHIT. However, he was able to give Boruto and Sarada clues to someone who is able to help. The White Snake Sage.

Boruto has an upbeat theme to it when compared to Naruto. The visuals are more focused on bright, cheerful and colourful animations. It is really targeting the newer generation of anime viewers. The battle intensity from Naruto battles has yet to be seen from the crossover which is really disappointing but as a viewer, I still have hope that it will get just as or even more intense than what we’ve seen. THIS ANIME SHALL NOT DISAPPOINT!