Once you’ve met someone you never really forget them.

In the film, Spirited Away, directed by Hayao Miyazaki, the two prominent film techniques used were visual symbolism and dialogue. These techniques helped viewers understand the three main ideas in Spirited away, which are greed, identity and good vs evil. Spirited Away is about a 10-year-old girl called Chihiro moving towns and stumble across an abandoned theme park village. Her parents were turned into pigs after eating some of the local food. Chihiro finds a mysterious boy Haku who tells her that this is a supernatural resort, and she needs to work to free her parents.

In the film Spirited Away visual symbolism helped viewers understand the theme of Good vs Evil.  For most of the film, Haku along with Chihiro is on the good side, whereas Yubaba and Zeniba, are on the bad side. Visual symbolism makes the audience believe that the characters are associated with mystical powers, emotions, and states of mind. For example, Haku and Chihiro both have very fair skin which is symbolising innocence like an angel. Chihiro has small facial features, like a baby which are considered cute in our society. Another example is Yubaba and Zeniba who are both witches have portrayed with very large heads almost the same size as their bodies making them appear tough and evil. Furthermore, she is very wrinkly and has lots of warts on her face. This makes us think, people who appear more ugly are associated with evil.

Visual Symbolism helped viewers understand the theme of Greed. The owner of the bathhouse, Yubaba is the most greedy person out there because almost every time we see her in the movie she is usually dressed in rich clothing with gold jewellery and other excessive gems. She does this so she can show her power over everyone else. For example, when Yubaba realized that the customer was giving gold she shouted “Ahh, gold! All Gold!”. But as a punishment of being greedy, the gold turned into mud. Everyone in the bathhouse is greedy but it truly shows when No face was creating gold and giving it away. When this happened everyone started to give No face delicious or exotic foods.

An example of Greed was when Chihiro parents went into a restaurant that they weren’t invited to and started eating rapidly. This symbolised both greed and gluttony, therefore, they were turned into pigs. Hayao Miyazaki did this to show the sin of greed. As said in the bible “Watch out! Be on your guard against all kinds of greed; a man’s life does not consist in the abundance of his possessions”(Luke 12:15). Hayao Miyazaki is trying to show that everyone can become greedy if they are persuaded by the right things.

Visual Symbolism helped viewers understand the theme of Identity. When Chihiro signed the contract to get a job at the bathhouse, Yubaba stole parts of her name and made it Sen. This is called Contract Bestowal and is the way that Yubaba keeps the worker from escaping the bathhouse. Over time the workers eventually forget their name and lose their identity.  An example is when Yubaba said “So your names Chihiro such a pretty name (Pull characters of her name Chihiro and leaf Sen) and belongs to me now from now on your name is Sen”

But luckily Haku reminds Sen by saying “Here are your old clothes, you’ll need them to get home”. She remembers her real name and can use it escape. She also remembers Haku’s name which is Kohaku. When she was young she fell into a river and a river spirit called the Kohaku saved her. This set Haku and Chihiro free and they were able to leave the spirit world. Hayao Miyazaki could be symbolising that when you take someone’s name, you are also taking away their identity also taking away their soul.

After Yababa stole Sen’s identity (formerly known as Chihiro), Sen had to take care of herself because her parent were now pigs. This made her become more responsible for herself and her job giving her a stable identity in the bathhouse. An example of her having a stable identity is when she was offered gold from No face but refused. Chihiro learned from her father’s mistake of thinking that money can solve every problem.

She wisely chooses to do her duties instead of taking gold from No Face. No Face has never had an identity because has never had any friends or family that could teach him. He is trying to lure the bathhouse workers with gold and with want they want gold. If they accept No face will devour them and take the identity of the eaten person. Since he has the identity of the bathhouse worker he has all the greed, gluttony and viciousness and this doesn’t make him too happy because they were pretty empty on the inside. This would explain why No face wants to have Sen’s identity because she has the best identity in the bathhouse.

Furthermore, she was very respectful and kind to No face. Hayao Miyazaki wanted to symbolise No face as a Hungry ghost. Hungry ghosts are similar to no face because a hungry ghost has a mouth the size of a needle’s eye and a stomach the size of a mountain as written in Buddhist text. No face is like a hungry ghost because he had a never-ending appetite. The director Hayao Miyazaki is trying to explain that our identity is the result of other people’s identity especially close friends or family.

In the film, Spirited Away Dialogue helped viewers understand the theme of Greed. Chihiro’s father said at the start of the film “Don’t worry, you’ve got Daddy here. He’s got credit cards and cash.”. Chihiro’s father thought that wealth can compensate for lack of manners and respect. Chihiro learns from her dad’s mistakes. An example is when No face was offering gold then Chihiro said: “I don’t want any but thanks, I’m sorry but I’m in a very big hurry” and runs off. Chihiro knew that money or gold can’t solve every issue and those who give into greed with be condemned to servitude. I believe that the director Hayao Miyazaki is trying to show people the punishment of the greed, gluttony as mentioned in the seven deadly sins is paid in enslavement.

Lin Waifu, she can give me a bath any day ❤ 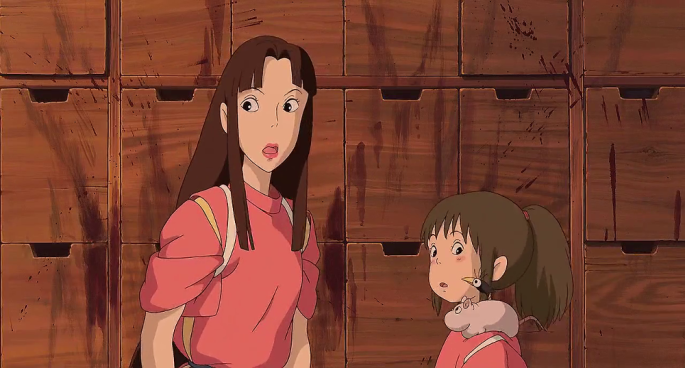 4 thoughts on “Spirited Away”