Now I need something big and hard, or I just can’t endure it. Megumin- Explosion Magic 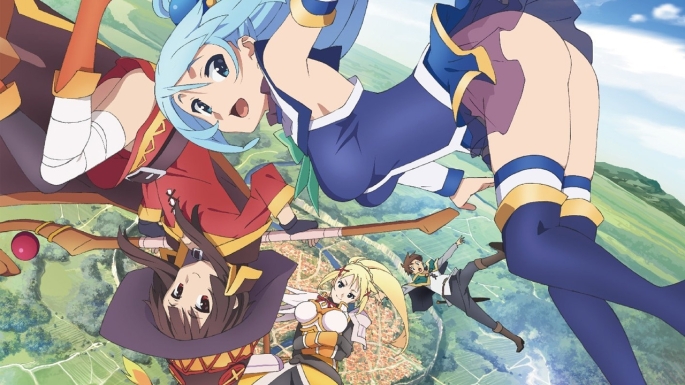 Welcome to the world of Konosuba, where the traditional Isekai standards are thrown out the window and laughed upon for its normality. Humour, wild cards and sexy girls definitely make this anime ONE OF THE BEST that I’ve ever seen. The perfect combination of music, plot (and did I say hot girls?) all blended into one spectacular anime. Kinda like a delicious fruit smoothie on a hot summers day. SATISFYING.

Let’s start off with your average Isekai death ritual. We’ve got our NEET Kazuma who was walking back from his venture to the game store. With his R18+ game in hand, he saw his attractive boner inducing classmate about to get hit by a car. Being the stereotypical good guy at the wrong time, he decides to jump in and take the blow for her. In the end, the girl lived, the car was fine andddddd he died of an emotional shock. Even his parents laughed at the cause of death lol

In the afterlife, he meets this beautiful goddess named Aqua, who too laughed at his cause of death. Kazuma was given two very interest choices for his good deed. To be reincarnated into the human world once again, or to be reincarnated into an alternate world. He was permitted one wish which was to bring anything with him. A powerful sword, crazy psychic powers, incredible wealth but with a comedic turn of events due to Kazuma being butthurt, he pointed to the goddess and chose her instead.

Off they go into a fantasy world. You would think that Kazuma is incredibly lucky to have such a hot goddess helping him out but you would be wrong. This goddess is not only physically THICC but mentally THICC in the head as well lol.  With literally 0 intelligence points, she uses her level up points on the only useful skill known to man. That’s right people, a skill that allows her to shoot up a minuscule stream of water from her fan to show off as a party trick. NATURE’S BEAUTY!

Kazuma gains a couple more girls into his harem. The 3rd member goes by the name of Megumin. The Arch Wizard who’s only one love and true desire is to blow shit up with explosion magic. However, after casting one, she becomes completely useless to the point where her teammates literally have to carry her lol. The 4th member is called Darkness. From the name who could probably deduce that she is a masochist who finds it pleasurable to get beaten up physically and mentally. Well tbh no one was expecting that but it sure as hell funny lol

They go many adventures together and by facing various challenges their friendship foster into something truly “unique”. Kazuma is the brains of the herd as you can probably see the others are pretty useless by themselves lol. Their ultimate goal is to defeat the Devil King but to be honest, they didn’t really get anywhere in the first season because due to a series of unfortunate events caused by Aqua. Credits to Aqua in the second season where she became a little more useful in the fights lol.

If you’re wanting something lighthearted for the shits and gigs then this anime will be able to satisfy your 2am munchies. Do not try to search for any seriousness in the anime because everything they do or say is pretty much a joke. I thoroughly enjoyed the comedic plot as well as the jokes being thrown around. You’ll fall in love with the main characters as they are all “unique” in some way or another. Hopefully, they will announce a season 3 because this anime deserves more episodes 🙂 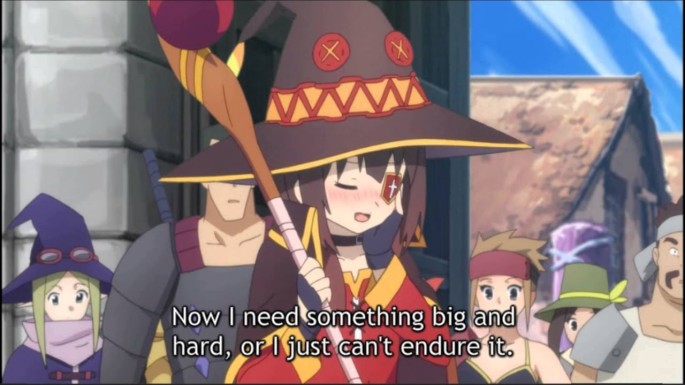