When you said that you hate yourself, it made me want to tell you all the wonderful things I know about you.

Welcome to Re:Zero, the anime where the main protagonist is realistically pathetic.  If you’ve come here expecting an over-powered badass protagonist then turn yo ass right back to One Punch Man or Dragon Ball Z lol. However, if you’re here to see best girl Rem and Ram then I highly advise you screenshot their pictures for hands-on academic purposes and pleasurable learning experience.

We have our usual otaku Natsuki Subaru. You would think he was the heir to the Subaru automobile company but you would be very disappointed. One night Subaru got the munchies and decided to visit his local Konbini (pretty much a 7-Eleven). On his way back to his apartment, he got hit by a car and boom, into another world he goes.

He gets transported to your typical RPG world in medieval times. He runs into some thieves and tries to fight them. Being the complete noob, he gets stabs and dies. THE END. Can’t be that easy right? He somehow respawns at the same starting place prior to the fight. Being as confused as the viewers at home, Subaru decides to test it out again. And to our surprise, the same thing happened. Using his limited brain cells, he was able to comprehend and concluded his ability to be “Return By Death“. Kinda like a save point on your Pokémon game.

He awkwardly meets a silver-haired half-elf cuttie called Emilia and her spirit companion Puck. Subaru was bewitched by her beauty because she was packing bro. His gaze was stuck on her like a piece of gum under a car tyre. She was searching for her “insignia” badge like thing for her royalty selection. Subaru agrees to help her find it after she saved him the ass whooping in the alley.

After a few trails and error and dying about 30 times, Subaru was able to track down the whereabouts of the insignia but was stuck with the almost impossible mission. Killing a super sexy oppai assassin Elsa whos moves are nearly as good as her curves. However, with the help of his friend Reinhart, Subaru was able to protect Emelia from her imminent death. Oh, and Loli cat girl Felt decides to return the stolen insignia to the rightful owner.

Subaru later finds himself in a super king size bed in the Roswaal mansion. At the end of the bed past his huge dick, he sees super babe twin Rem and Ram. Rem is the sea breeze blue hair chick with the D cups while Ram is the candy floss pink hair chick who is a flat is justice candidate. Life can be unfair.

Being the broke as that Subaru is, he convinces Roswaal to hire him as a butler. After spending 3 days at the mansion, learning the ways with the twins, he mysteriously dies. After returning from death, he investigates the possible causes which all in disappointment took about 5 deaths until finally learning that it was a puny dog that bit him and gave him a curse.

It turns out multiple children in the village were also affected! Most of them wandered into the forest at night, supposedly sleepwalking and were in dangered on getting eaten by the Mabeasts. Subaru and best girl Rem decides to enter the forest to save them all. Subaru was able to distract most of the mabeasts while Rem finished them off with her kinky flail weapon. If she doesn’t make you moist then I don’t know what will. Eventually, with the help of Roswaal, they defeated all the mabeast and Rem falls in love with Subaru for saving her. Boob contact was noted. Super jealous. 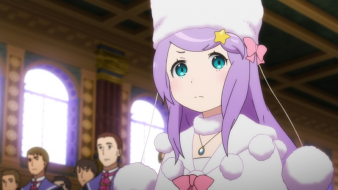 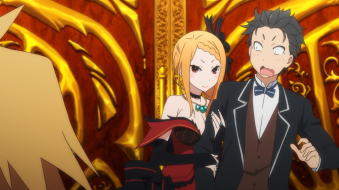 The royal selection came around and Subaru escorted Emelia to the capital. We can see the royal candidates Emelia, Priscilla, Crusch, Anastasia and Felt. They are all banging in their own ways ❤ Subaru was being a huge dick in front of embarrassing not Emelia but himself. He got into some beef with the royal knights club and got his ass whooped by Julius, the top knight. This kinda gave Subaru and Emelia bad blood and made things hella awkward. Subaru at this point looks a like a madman on steroids with all his emotional bullshit that’s he was spouting.

After recovering who his beef with Julius, Subaru trains with Wilhelm in the art of sword fighting to get stronger. Rem got a telepathy message that Ram was in distress so the two decided to travel back to the mansion. Once they got there, Subaru saw a sea of dead bodies including Ram and Emelia. Just a bit late there buddy lol. After dying a few more times, he discovered that the Witch’s Cult was responsible. Betelgeuse was the fucked up mad villain of this series and he will seriously give you goosebumps.

During his journey, he runs into a huggggeeeee mabeast called the White Whale. I couldn’t think of a better description because that’s really what it was lol. Rem sacrificed herself so that Subaru could escape. Barusu was able to get to the mansion but and now nobody can remember best girl Rem. Subaru confessed his return to death ability and Emelia dies. Great. Puck got pissed off, transformed into a huge wolf and kills everyone including the Witch’s Cult. After respawning, Subaru nearly gives up and plans to run away with best girl Rem to get married but was rejected.

Subaru decides to ask for help from the fellow royal candidates to defeat the White Whale. Crusch and Anastasia join the battle after a lot of negotiations. Wilhelm poked his sword into the white whale and kills it. YAY! After that Subaru was able to defeat Betelgeuse 10 times with the help of Julius. He was a stubborn one. Making up with Emelia, Subaru confessed his love to her and with no response, it plays it cool like it didn’t hurt lol.

Re:Zero has an amazingly pathetic protagonist but what I loved about this anime because it was realistic. Anyone who was thrown into a situation like that would more or less end up doing the same as Subaru. I really appreciate the storyline but making Subaru less of a useless character would have been better haha.